Makayla doesn't have a physical appearance. She is only known to be female.

Makayla's specific personality is unknown. However, due to the fact that the children are assigned toys most compatible and similar to their general personalities, it can be assumed that Makayla likes to eat, is somewhat a glutton, and is perhaps rather free-spirited, just like Candy Cat.

As revealed in the first Assessment Form, Makayla is a somewhat in-between individual, able to concentrate deeply at times but also panics upon making mistakes. She also has good reflexes, able to react quickly to the Mini Huggies, but average hand-eye coordination, seeing as how she was unable to fire her GrabPack accurately and precisely each time. She was, however, distracted immensely in Statues by an unknown 'something else'.

On a redo, she ended up performing better with fairly positive results coming from Musical Memory. She did subpar in Wack-a-Wuggy, but she had better reaction timing. She did well in Statues, having a large distance from PJ Pug-a-Pillar, but was still distracted from presumably the same unknown entity in Statues. 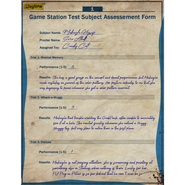 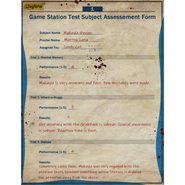