Poppy Playtime Wiki
Register
Don't have an account?
Sign In
Advertisement
in: Characters, Employees, Chapter 1: A Tight Squeeze,
and 2 more

Leith Pierre (also misspelt as Laithe Pierre or Laith Pierre) is the head of Innovation at Playtime Co.. He debuted in Chapter 1: A Tight Squeeze of Poppy Playtime.

Leith Pierre seems to be an ingenious and proud man, someone who is very dedicated to his work and just like his work, he comes to be someone innovative and someone a bit jumpy, due to the fact that there is a rule about not hiding behind doors to scare him. It is also speculated that he is someone mysterious and peculiar or even some kind of villain, by hiding certain aspects about his work and being direct with the intruders. He is speculated to be a easily scared person as well, having certain things contact the authorities, and that being one of the "tame" parts of their security.

Leith Pierre seems to be arrogant in his position as the head of innovation at the company he works at and is not above mistreating his peers, speaking rudely to his employees and his workers, to the point of threatening to fire them. 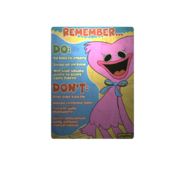 A poster of the rules at Playtime Co.'s toy factory (taken from the NFT card), mentioning Laith Pierre.