Poppy Playtime Wiki
Register
Don't have an account?
Sign In
Advertisement
in: Locations, Chapter 2: Fly in a Web


The Game Station is a location from Poppy Playtime Chapter 2: "Fly in a Web". It is a location at the Playtime Co. toy factory. It acts as a hub room that the player eventually makes their way back to multiple times for the majority of the chapter.

The Game Station is an underground, colorful area with no natural light to be seen, which was complained about in a proposal to add fake windows to result in the children having good mental health. It contains lots of playground structures for kids to play with while waiting for the next mini-game to start. In one of these playground structures, a Train Trophy can be seen inside one of the tunnels. These structures are extremely colorful, full of red, yellow, and blue colors. Most of the structures include a playground-like area with slides, circular monkey bars, and spinning wheels. In the far center of the area, a massive, colorful train can be seen under the Game Station logo. This train is a key part of Chapter 2: Fly in a Web, as it is used to escape the factory at the end of the chapter.

Before Playtime Co. closed, the Game Station was packed with kids, having its own Heyday inside the Train Station. The children would be guided by Mommy Long Legs, waiting for the pre-recorded Stella Greyber intercom would guide the kids to the next room. It is speculated that these rooms were to test which children had the best playthrough, and would be a good candidate for being experimented with. This is probably why Mommy Long Legs is "Super nice to other experiments" as they were kids who had treated Mommy as a actual mother.

On the ceiling of the Game Station, a control area can be seen. This control room is full of buttons, security cameras, etc. We get to access this room after beating Mommy Long Legs and navigating through Bay 09. Poppy Playtime can be seen trapped in the webs, and two documents reviewing the same kid who first played the games sloppy, then later with ease. After freeing Poppy from the webs, we are supposed to go to the Train Station.

Musical Memory otherwise known as the Memory and Cognitive Recognition Test is a mini-game in Chapter 2: Fly in a Web, located in the Game Station. It is a game that tests The Player's memory. The game will show sequence of colours and symbols will show on a screen, and you must replicate it with the buttons seen in front you. It is similar to the popular toy, Simon Says.

Wack-a-Wuggy is a mini-game in Chapter 2: Fly in a Web, located in the Game Station. It is a game that tests The Player's reactionary abilities extent. It is similar to the popular game Whack-a-Mole.

Statues is a mini-game in Chapter 2: Fly in a Web, located in the Game Station. It is a game that test The Player's agility, strength, and endurance. The first piece of the Playtime Co. Heyday painting. 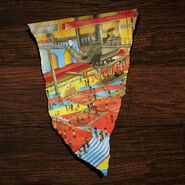 The second piece of the Playtime Co. Heyday painting. 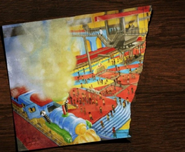 Ditto, but connected with the first piece. 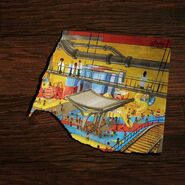 The third piece of the Playtime Co. Heyday painting.

Ditto, but connected with the first two pieces. The fourth piece of the Playtime Co. Heyday painting.

Ditto, but connected with the first three pieces.

The entire painting hanged on a wooden wall, alongside the release date for Chapter 2 (And the Heyday for Playtime Co.)

The train at the Game Station as one of the collectible trophies.