Poppy Playtime Wiki
Register
Don't have an account?
Sign In
Advertisement
in: Characters, Chapter 1: A Tight Squeeze, Employees,
and 4 more

View source
watch 01:36
We're Getting Mutants in the MCU - The Loop
Do you like this video?
Play Sound

Founder & Overseer of Playtime Co. and their employees

Elliot Ludwig is a recurring character in Poppy Playtime. He is most known for his position as both the Founder and Overseer of Playtime Co..

Elliot Ludwig is an old man with light skin, blackish hair, and an unknown eye color (presumably brown). He is seen wearing some suit during the very first VHS tape in the beginning of Chapter 1: A Tight Squeeze, which seems to be an old Playtime Co. commercial for Poppy herself and for the factory tours that were once held there. This appearance is also the first and last appearance we see him. It is unknown if Elliot will have any other cameos.

As shown in the VHS played in his office, Elliot was described as, "Divorced, but a family man at heart" - which is up to interpretation to the player, as it can insinuate many things. He is deemed a hard working man, who often worked overtime to achieve his goals in the factory. He was described as surviving a tragic loss and essentially creating an empire within his factory, essentially creating such a powerful business that is Playtime Co. - although at the end of the tape an important year is cut off. It is, however, in the 20th century.

Playtime Co. was founded in 1930 by the brilliant Elliot Ludwig. Like his namesake, Ludwig was a visionary and creative genius. Ludwig devoted every waking second of his life to bring joy to children. However, this relentless work ethic came at a cost of his personal life, as his wife Molly divorced him in 1930. Despite this, as well as an unfortunate family death occurring later in his life, Elliot never stopped creating. Ludwig revolutionized the toy industry and brought happiness to millions. The world will never be the same. 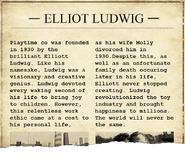 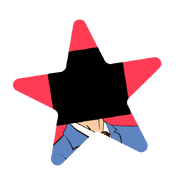 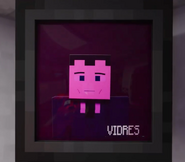